Millions of babies are born prematurely around the world and prematurity is the number one leading cause of death in babies in the United States.

A normal pregnancy lasts until about 40 weeks of gestation. Prematurity or preterm birth is defined as a birth that occurs prior to the 37th week of pregnancy. Approximately 380,000 newborns (or 10% of all births in the United States per year) are born preterm, and from 2014-2019 until COVID arrived, the prematurity rate in the nation had increased year-to-year.

Prematurity Awareness Month is recognized every November and World Prematurity Day on November 17. This article reflects on some of the revolutionary breakthroughs in neonatal care that shaped the modern discipline of Neonatology.

A Brief History of Neonatology

What Are The Common Complications of Prematurity?

Complications of mild or moderately preterm birth include immature lungs, poor oral-motor or feeding skills, and difficulty with temperature regulation. The severely preterm newborn may have more severe respiratory issues, difficulties undergoing fetal to postnatal circulatory transition, and may suffer severe morbidities such as:

All of these morbidities may lead to chronic problems later in life including:


How is COVID-19 Affecting the Premature Neonate?

The risk of giving birth prematurely increases 40% if the mother is infected with COVID. If she has comorbid conditions in addition to COVID (i.e. hypertension, diabetes or obesity), the risk increases to 160%. For this reason, and due to the increased risk of morbidity and mortality in pregnant women infected with COVID, the Centers for Disease Control (CDC) and the American College of Obstetricians and Gynecologists (ACOG) strongly recommend that all pregnant women get vaccinated against COVID-19.

The vertical transmission rate (transfer of COVID from infected mother to her newborn at birth) is approximately 2-3%. Additional newborns are infected shortly after birth from the mother or other caregivers. While the perinatal transmission rate is low, the effects of COVID on the newborn are still largely unknown. Some babies are asymptomatic, some have no more than a mild viral upper respiratory tract infection, however some require respiratory support and hospital or ICU admission.

Our NICUs specialize in all conditions affecting newborns, consistently ranking among the top hospitals in the world reporting high survival rates and low rates of neonatal morbidities. We have a specialized BPD Program focused on care of the most severely affected BPD patients and is one of only 26 centers around the world (and the only one in Florida) that is a member of the prestigious national BPD Collaborative. In addition, we care for babies with brain injuries at birth and is a member of the Florida Neonatal Neurologic Network (FN3).

Quality and safety is front-and-center in our NICUs, which report outcomes in the top quartile of their benchmarking collaboratives at the Vermont Oxford Network (VON) and the Florida Perinatal Quality Collaborative (FPQC). There are multiple ongoing quality initiatives focused on improving rates of chronic lung disease, intraventricular hemorrhage, nutritional parameters, admission hypothermia, infections, unplanned extubations, antibiotic usage, readmissions, and more.

There is also a focus on optimal neurodevelopmental care as evidenced by the many developmental initiatives such as skin-to-skin (Kangaroo Care), Reach Out and Read program, Milk Drop study, Mother’s Own Milk initiative and developmental rounds of the BPD patient.

What’s in store for premature neonates in the future?

We are excited to see what the future holds for the world of prematurity. Just 50 years ago there were few resources, limited technology and medications, and a paucity of research available for premature neonates. We are now studying adults who were born prematurely during that era, we have more therapies and pharmaceuticals available for the treatment of premature neonatal conditions, and we have specialized teams of clinicians and therapists devoted to their well-being.

The Human Genome Project was completed less than 20 years ago and we are still in our infancy in terms of understanding what role genetics plays in neonatal diseases, and specifically those related to prematurity. The role that an individual’s genetic code plays in disease severity may help explain why one baby fares better or worse than another, and if we knew that a baby was predisposed to a particular disease process, perhaps it could be prevented or mitigated by having that prior knowledge. We already do genetic testing when we suspect certain conditions and sometimes whole exome sequencing (WES) in challenging cases. The future will help us understand the meaning of the variants that are discovered with these tests.

One promising prospective therapy is the artificial placenta. Studies of artificial placentas are ongoing – the technology involves connecting a fetus that cannot remain in its mother’s womb to a blood filtration machine to allow extrauterine development similar to the intrauterine environment. Success has already been achieved in the animal (lamb) model. This might revolutionize neonatal care and would convert current NICUs into sci-fi units filled with life-sustaining fluid-filled pods.

We have learned an incredible amount since Neonatology became a specialty about 50 years ago and are now able to save babies born at only half of normal gestation. The goal moving forward is to optimize outcomes of these most fragile infants by continuing to learn from our past while preparing for the future. 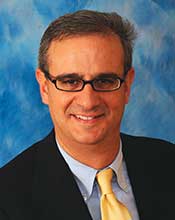