Every May, we proudly share success stories and advocate for positive changes in the life of those with Cystic Fibrosis (CF).

Discover an amazing story in medicine

Back in 1955, few children with CF lived long enough to even attend elementary school. The Cystic Fibrosis Foundation was founded that year by concerned parents on a mission to save their children’s lives and raise awareness. 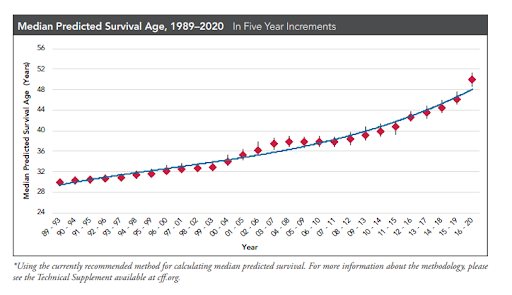 Today, thanks to dramatic research gains, nationwide CF newborn screening, and Foundation-fueled care, more than half of people with CF are adults, age 18 or older. Many people with CF can expect to live healthy, fulfilling lives into their 30s, 40s, and beyond.

CF is a progressive, genetic disease causing long lasting lung infections and limiting ability to breathe over time. In people with CF, mutations in the cystic fibrosis transmembrane conductance regulator (CFTR) gene cause the CFTR protein to become dysfunctional. When the protein is not working correctly, it is unable to help move chloride to the cell surface. Without chloride to attract water to the cell surface, mucus in various organs becomes thick and sticky.

More than 30,000 children and adults in the United States have CF (70,000 worldwide).  CF affects people of every racial and ethnic group. In men, CF can affect their ability to have children.

Mucus clogs the airways and traps germs, like bacteria, leading to infections, inflammation, respiratory failure, and other complications. For this reason, avoiding germs is top concern for people with CF.

Mucus buildup prevents the release of digestive enzymes that help the body to absorb food and key nutrients, resulting in malnutrition and poor growth.

The strength of the CF community has been key in making significant advancements in both research and care, as well as providing financial support for much of the current CF-related research and drug discovery.

1955: The Cystic Fibrosis Foundation is formed by a group of concerned parents, determined to save their children’s lives.

1966: The Cystic Fibrosis Foundation launches a patient data registry to collect health information from patients seen at Foundation-accredited care centers. Today’s CF Patient Registry is a best-in-class resource driving progress in CF care and research: it serves as a model for other disease registries.

1989: A team of Foundation-supported scientists discovers the defective cystic fibrosis transmembrane conductance regulator (CFTR) gene and its protein product. This discovery opens the door to understanding the disease at its most basic level.

1993: The Food and Drug Administration (FDA) approves Pulmozyme®, which is proven to thin the tenacious, sticky mucus in the lungs and is the first drug developed specifically for CF. The Foundation provided early stage funding that helped bring the drug to market.

1997: The Foundation establishes the Therapeutics Development Program, which provides funding during the early phase of drug discovery and development, when the risk for failure is greatest and companies are the most hesitant to invest.

1998: Therapeutic Development Network is established with the designation of specialized clinical research centers. This becomes the seed of the largest CF clinical trial network in the world.

2000: The Foundation invests $40 million – the first large investment in a company – in Aurora Biosciences, later Vertex Pharmaceuticals, to fund development of what would become the first therapies to treat the underlying cause of CF. This marks the first major test of the Foundation’s venture philanthropy model.

2006: Supported by the Foundation, one of the first oral drugs to work at the cellular level and attack the root cause of CF enters clinical trials. It would later be known as ivacaftor (Kalydeco®).

2006: The CF Congressional Caucus is launched by Reps. Edward Markey (D-Mass.) and Cliff Stearns (R-Fla.), and became one of the largest congressional caucuses of its kind.

2007: The Foundation launches March on the Hill to educate elected officials about the need for continued funding for NIH, FDA and other drug development and research programs.

2009:  The Foundation's Teen Advocacy Day launches, bringing teens from across the country to advocate for their loved ones with CF. Both flagship events are part of the Foundation's critical advocacy program.

2010: Universal newborn screening for cystic fibrosis is instituted in all 50 states. Diagnosis at an early age is critical to establishing care.

2010: The Foundation raises $175 million through the Milestones campaign – a goal that fundraising industry advisers said would be impossible for a health care nonprofit to reach.

2012: FDA approves ivacaftor (Kalydeco) for a small group of people with CF ages 6 and older. The drug is the first to address the underlying cause of CF and opens exciting new doors to research and development that may lead to a cure for those living with the disease.

2015: FDA approves the lumacaftor/ivacaftor (Orkambi®) combination drug for people ages 12 and older who have two copies of the most common CF mutation, F508del – representing about a third of those with CF in the United States.

2016: To better address the needs of the growing adult CF population, the Foundation establishes a new department focused on listening to, supporting and partnering with the CF community. This includes collaborative programs to create virtual conferences, use community insights to actively shape research and programs, offer peer support and fund ideas that impact the broader CF community.

2017: The Foundation launches the Lung Transplant Initiative, an effort to improve outcomes for people with CF who undergo lung transplantation.

2019: FDA approves the triple combination modulator, Trikafta, (elexacaftor/tezacaftor/ivacaftor), for people with CF ages 12 and older who have at least one copy of the F508del mutation, regardless of their other mutation. This historic breakthrough means that for the first time the majority of the CF population could eventually have a highly effective therapy for the underlying cause of their disease.

2019: The Foundation launches its Path to a Cure, a $500 million research portfolio to accelerate treatments for all people with CF, including those who do not yet have a transformative treatment for their disease.

2020: Despite COVID-19 global pandemic challenges, the CF Foundation funds more in research and care during 2020 than at any other time in the history of its mission.

2021: The U.S. Food and Drug Administration has approved the use of Trikafta, (elexacaftor/tezacaftor/ivacaftor), for children with cystic fibrosis ages 6 through 11 who have at least one copy of the F508del mutation.

Recent data from 2020, based upon the CF registry from the CF foundation, shows the impact of modulator drugs, particularly Trikafta, in survival rate, mortality rate, pregnancy numbers, and transplant numbers: 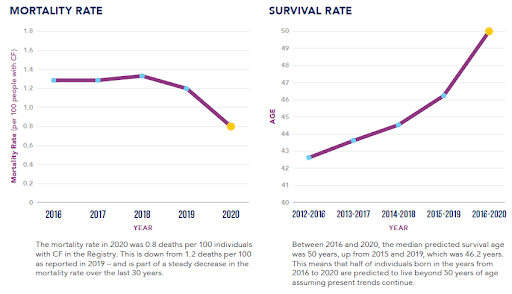 Impact of Covid 19 on CF patients

Overall, children and adults with CF with COVID-19 are doing better than initially expected. Many have recovered by managing their illness at home. However, for some with underlying health conditions, including chronic lung diseases like CF, evidence suggests a greater risk for serious illness if infected with Covid 19 virus.

People with CF who have had a lung transplant or any solid organ transplant may be particularly vulnerable to serious illness from COVID 19. The CDC has additional recommendations regarding vaccine doses and treatment to reduce severity of illness before exposure to the virus. Below is the latest data from the CF Foundation showing the number of patients impacted by Covid 19 and vaccination status. 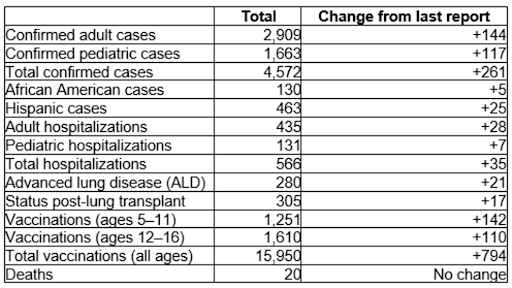 Newborn screening is key in identifying patients with CF at birth. We are proud to be a designated referral center for newborn screening for Broward, West Palm Beach, and Martin counties.  This allows us to provide immediate care and education to patients and their families.

In addition to our comprehensive care, we have access to hospital pediatric specialists and subspecialists including gastroenterologist, infectious disease physicians, immunology and allergy physicians and ENT physicians, assuring seamless transition for patients needing additional specialty care beyond our services.